anniversary with starfish on sunset beach 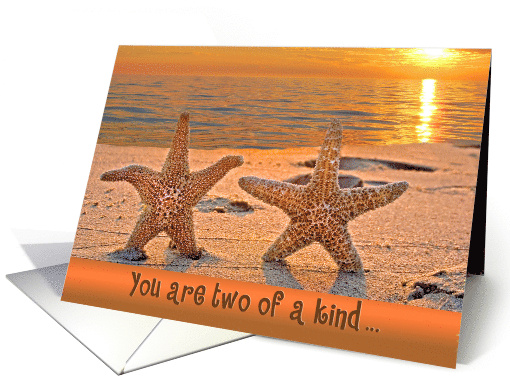 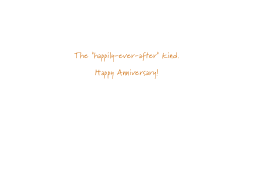 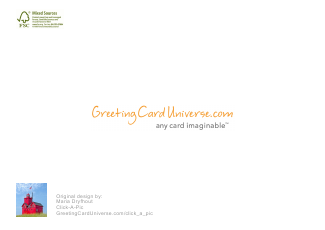 "Different type of anniversary card" By Margaret K - October 28th, 2020
This card I sent to my oldest son and his wife both ocean people. They are married fifteen years. They raise and train shutdown hounds and therefore do every thing together.

"Great anniversary card for gay partners" By lkdh - October 27th, 2020
Sent this to the gay couple who liked the gay wedding card we sent them (from here)! Good for couples who love the beach, or who simply are really like each other.

"They loved this card" By Tom R - September 24th, 2020
They had a beach wedding six years ago and this card reminded them of that experience. Love how you can personalize each card and they have great choices to pick from. Always on time when ordered to be mailed direct.

"Starfish anniversary" By Jean M - August 31st, 2020
Received with delight! A bit of an issue with using 'recipients' addresses as the system doesn't like blank lines and fills them in by the 'giver' address? Easily overcome by duplication of some part of the address ie postcodes.

"Just Sent Darling Anniversary Card" By Linda V - March 30th, 2019
Just sent but not received yet. I expect them to call me laughing! Putting funny personal pictures inside is such a great way to make people smile! I love being able to customize with personal pictures as it makes my friends and family smile to get such fun and personal cards!!!

"Nice quaility" By Jeff D - February 27th, 2019
Nice weight on the paper. The printing is clear and when you write on the card, the ink doesn't smudge. Will look to this site again to order.

"4th anniversary" By MITZI S - July 2nd, 2018
My son and daughter-in-law loved the card. Great quality. Will buy many more in the future.

"Anniversary at the Waterfront" By MARILYN L - January 17th, 2018
My daughter and son-in-law moved to the waterfront recently and I wanted to use that as a background. Loved the star fish.

"ANNIVERSARY OF BEACH WEDDING" By Mitch M - May 11th, 2017
Personalized reminder for my son and his wife. The theme of their wedding was starfish...PERFECT!

"Anniversary card" By Martha H - April 30th, 2016
I like this anniversary card a lot. I tend to purchase cards with a nautical theme so this one was perfect.

"This is a Fun Card For A Nice Couple" By Stu D - April 18th, 2015
I purchased this card for friends. It was nice to be able to look at some nice cards online instead of going to Walmart and having to settle for something that you're just not thrilled with.

"A different kind of anniversary card" By JOHN LLOYD - February 17th, 2015
The artist had an interesting idea for this card, drawing two starfish on a sun-lit beach representing a happily-married couple.

"friends' beach themed wedding" By Kat A - August 26th, 2014
My friends loved this anniversary card & made special thanks to me for tying in there beach wedding theme. meant a lot to them.

"Unique and Perfect for Anniversary" By Shelley C - August 13th, 2014
Impressed! Quality and colors are fantastic. I'm sending to my parents for their anniversary. Love it!

"50th Anniversary card" By Lynn W - April 16th, 2014
Perfect card for my cousin from the shore celebrating his 50th wedding anniversary. Good selection of fonts for my own personal wording on inside of card added to the card's appearance.