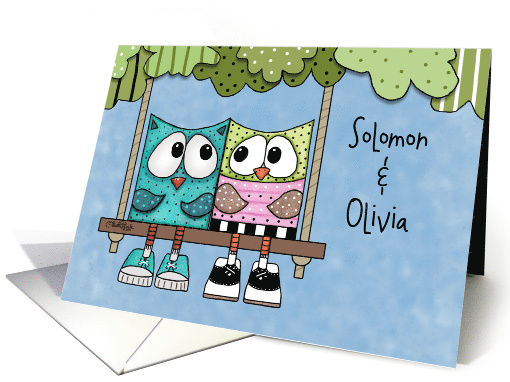 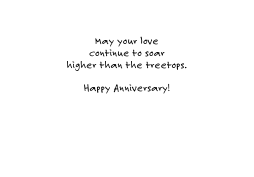 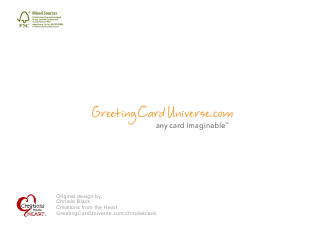 "They loved it!" By Donna H - June 19th, 2020
My son and daughter-in-law loved this anniversary card. It is cartoony without being silly. And I love the fact that their names can be added to the front of the card.

"I love this card." By Elizabeth H - June 6th, 2020
I loved how you could personalize the front of this card with the couple's names.

"Adorable Card" By Danika - October 29th, 2018
I bought this card for my grandparent's weeding anniversary. They loved it. It is cute and customizable so you can add you own personal touch, but if you can't think of the right words to say it already come with a pretty good inside message.

"Two Cute Anniversary Owls" By Teresa E - October 1st, 2018
Cute and quirky Anniversary Card for a young couple. Customize card your way by using some or all of the words provided. Or write in your own words.

"Anniversary greeting card" By Janet Steele - September 10th, 2018
I personalized my anniversary greeting card with both my husband's name and my own which was really fun. I really love that the person I talked to was able to guide me through the process and come out with a really personal card. Try it next time you need a card. Yo'll love the results and the squeals...I'm not kidding... of delight the card is going to.

"Anniversary Owls" By Joni - August 5th, 2018
I purchased this card for our daughter and son-in-law. It was perfect without being too serious or crazy humorous. I was able to personalize and the card was exactly what we were looking for. Excellent quality of paper & envelope.

"two appealing little owls" By dina - May 5th, 2018
A fun anniversary card, with the manes of the recipients to fill in. I thought it quite endearing and different but there's something a bit muddy about the colours - the sky appears stormy rather than serene

"Unique Anniversary Card" By Diane E - April 17th, 2018
I purchased this card for my brother and sister-in-law's anniversary. I love how I was able to customize the front of the card with their names, and the sentiment inside did not need any changing. I love this card, and I will probably purchase it for other anniversaries.

"Even cuter than I expected" By Rosemary - April 5th, 2018
This card is absolutely adorable. Both the design and text in the card are really original and very sweet. I ordered the glossy finish and the colors are very bright and cheerful. I bought the card for a niece and her husband who will be celebrating their first anniversary. They haven't received it yet, but I'm sure they'll like it as much as I do.

"Good design with suitable words." By Jill H - March 3rd, 2018
I have used Greeting Cards Universe several times as their selection of cards is so varied.Once again i found just what I was looking for in design, words not too sentimental, easy to personalise, prompt delivery.

"Great value, cute cards !" By Rick B - November 6th, 2017
Easy to personalize, cards for all personalities, well made cards, excellent value and free, fast shipping !! What else can we say ??

"Daughter and hubby loved this!" By Mary K - July 4th, 2017
My daughter and son-in-law thought this card was so cute! The customizable front was an especially nice touch. Very deserving of five stars!

"ADORABLE ANNIVERSARY!" By Mitch M - May 11th, 2017
Great and personalizable. So cute for my sis and her hubby. I'd already sent them a different anniversary card from this company, but couldn't resist sending this one, too. Too bad I got my months mixed up and sent them 2 months early!! They loved them anyway!

"couple loved this card" By msk - October 13th, 2016
Couple's first response was "how did you do this?" This was a personalized anniversary card which our son and daughter in law really loved!

"Sweet card for a sweet couple" By Terri C - September 5th, 2016
Sent this one to my cousin and her husband...just thought it was sweet and let me put both of their names on the front of the card!

"Great bang for the buck" By Charles D - September 3rd, 2016
I ordered an anniversary card, personalized, for my wife. It was very easy to customize and order, and the price was great as well.

"Anniversary card" By Jan G - August 27th, 2016
So easy to make, delivery was quick and I impressed the receiver. Win, win all around!

"Anniversary Card" By Gail T - May 23rd, 2016
Anniversary card for a long time friend. I liked being able to enter the years they have been married.

"Sweeeeeeeet" By Janet U - April 22nd, 2016
Great personalized card for a Anniversary card! Could not beat the quality and price.